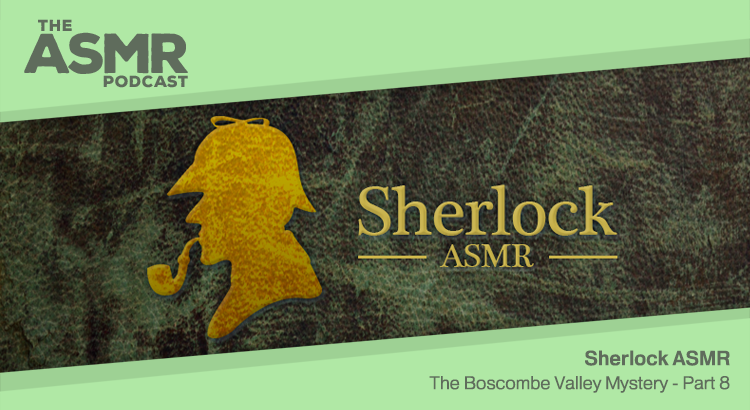 In Episode 79 of The ASMR Podcast we welcome back Sherlock ASMR, who continues his series of whispered Sherlock Holmes readings with the final part of ‘The Boscombe Valley Mystery’.

“It was in the early ’60’s at the diggings. I was a young chap then, hot-blooded and reckless, ready to turn my hand at anything; I got among bad companions, took to drink, had no luck with my claim, took to the bush, and in a word became what you would call over here a highway robber. There were six of us, and we had a wild, free life of it, sticking up a station from time to time, or stopping the wagons on the road to the diggings. Black Jack of Ballarat was the name I went under, and our party is still remembered in the colony as the Ballarat Gang.

“One day a gold convoy came down from Ballarat to Melbourne, and we lay in wait for it and attacked it. There were six troopers and six of us, so it was a close thing, but we emptied four of their saddles at the first volley. Three of our boys were killed, however, before we got the swag. I put my pistol to the head of the wagon-driver, who was this very man McCarthy. I wish to the Lord that I had shot him then, but I spared him, though I saw his wicked little eyes fixed on my face, as though to remember every feature. We got away with the gold, became wealthy men, and made our way over to England without being suspected. There I parted from my old pals and determined to settle down to a quiet and respectable life. I bought this estate, which chanced to be in the market, and I set myself to do a little good with my money, to make up for the way in which I had earned it. I married, too, and though my wife died young she left me my dear little Alice. Even when she was just a baby her wee hand seemed to lead me down the right path as nothing else had ever done. In a word, I turned over a new leaf and did my best to make up for the past. All was going well when McCarthy laid his grip upon me.

“I had gone up to town about an investment, and I met him in Regent Street with hardly a coat to his back or a boot to his foot.

“‘Here we are, Jack,’ says he, touching me on the arm; ‘we’ll be as good as a family to you. There’s two of us, me and my son, and you can have the keeping of us. If you don’t—it’s a fine, law-abiding country is England, and there’s always a policeman within hail.’

“Well, down they came to the west country, there was no shaking them off, and there they have lived rent free on my best land ever since. There was no rest for me, no peace, no forgetfulness; turn where I would, there was his cunning, grinning face at my elbow. It grew worse as Alice grew up, for he soon saw I was more afraid of her knowing my past than of the police. Whatever he wanted he must have, and whatever it was I gave him without question, land, money, houses, until at last he asked a thing which I could not give. He asked for Alice.

“His son, you see, had grown up, and so had my girl, and as I was known to be in weak health, it seemed a fine stroke to him that his lad should step into the whole property. But there I was firm. I would not have his cursed stock mixed with mine; not that I had any dislike to the lad, but his blood was in him, and that was enough. I stood firm. McCarthy threatened. I braved him to do his worst. We were to meet at the pool midway between our houses to talk it over.

“When I went down there I found him talking with his son, so I smoked a cigar and waited behind a tree until he should be alone. But as I listened to his talk all that was black and bitter in me seemed to come uppermost. He was urging his son to marry my daughter with as little regard for what she might think as if she were a slut from off the streets. It drove me mad to think that I and all that I held most dear should be in the power of such a man as this. Could I not snap the bond? I was already a dying and a desperate man. Though clear of mind and fairly strong of limb, I knew that my own fate was sealed. But my memory and my girl! Both could be saved if I could but silence that foul tongue. I did it, Mr. Holmes. I would do it again. Deeply as I have sinned, I have led a life of martyrdom to atone for it. But that my girl should be entangled in the same meshes which held me was more than I could suffer. I struck him down with no more compunction than if he had been some foul and venomous beast. His cry brought back his son; but I had gained the cover of the wood, though I was forced to go back to fetch the cloak which I had dropped in my flight. That is the true story, gentlemen, of all that occurred.”

“Well, it is not for me to judge you,” said Holmes as the old man signed the statement which had been drawn out. “I pray that we may never be exposed to such a temptation.”

“In view of your health, nothing. You are yourself aware that you will soon have to answer for your deed at a higher court than the Assizes. I will keep your confession, and if McCarthy is condemned I shall be forced to use it. If not, it shall never be seen by mortal eye; and your secret, whether you be alive or dead, shall be safe with us.”

“Farewell, then,” said the old man solemnly. “Your own deathbeds, when they come, will be the easier for the thought of the peace which you have given to mine.” Tottering and shaking in all his giant frame, he stumbled slowly from the room.

“God help us!” said Holmes after a long silence. “Why does fate play such tricks with poor, helpless worms? I never hear of such a case as this that I do not think of Baxter’s words, and say, ‘There, but for the grace of God, goes Sherlock Holmes.’”

James McCarthy was acquitted at the Assizes on the strength of a number of objections which had been drawn out by Holmes and submitted to the defending counsel. Old Turner lived for seven months after our interview, but he is now dead; and there is every prospect that the son and daughter may come to live happily together in ignorance of the black cloud which rests upon their past.