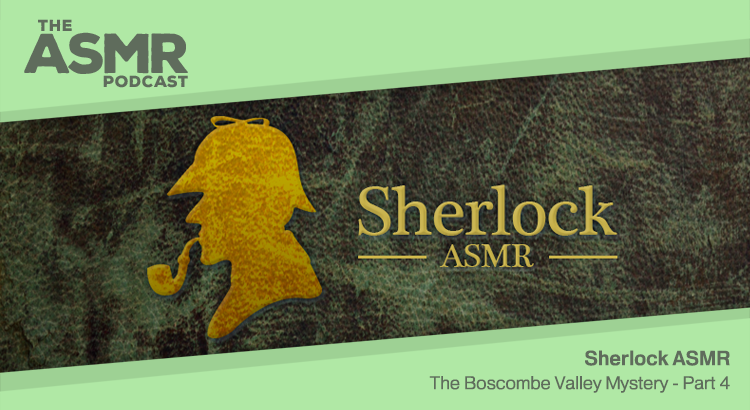 In Episode 72 of The ASMR Podcast we welcome back Sherlock ASMR, who continues his series of whispered Sherlock Holmes readings with the fourth part of ‘The Boscombe Valley Mystery’.

“But you have read the evidence. You have formed some conclusion? Do you not see some loophole, some flaw? Do you not yourself think that he is innocent?”

“I think that it is very probable.”

“There, now!” she cried, throwing back her head and looking defiantly at Lestrade. “You hear! He gives me hopes.”

Lestrade shrugged his shoulders. “I am afraid that my colleague has been a little quick in forming his conclusions,” he said.

“But he is right. Oh! I know that he is right. James never did it. And about his quarrel with his father, I am sure that the reason why he would not speak about it to the coroner was because I was concerned in it.”

“In what way?” asked Holmes.

“It is no time for me to hide anything. James and his father had many disagreements about me. Mr. McCarthy was very anxious that there should be a marriage between us. James and I have always loved each other as brother and sister; but of course he is young and has seen very little of life yet, and—and—well, he naturally did not wish to do anything like that yet. So there were quarrels, and this, I am sure, was one of them.”

“And your father?” asked Holmes. “Was he in favour of such a union?”

“No, he was averse to it also. No one but Mr. McCarthy was in favour of it.” A quick blush passed over her fresh young face as Holmes shot one of his keen, questioning glances at her.

“Thank you for this information,” said he. “May I see your father if I call to-morrow?”

“I am afraid the doctor won’t allow it.”

“Yes, have you not heard? Poor father has never been strong for years back, but this has broken him down completely. He has taken to his bed, and Dr. Willows says that he is a wreck and that his nervous system is shattered. Mr. McCarthy was the only man alive who had known dad in the old days in Victoria.”

“Ha! In Victoria! That is important.”

“Quite so; at the gold-mines, where, as I understand, Mr. Turner made his money.”

“Thank you, Miss Turner. You have been of material assistance to me.”

“You will tell me if you have any news to-morrow. No doubt you will go to the prison to see James. Oh, if you do, Mr. Holmes, do tell him that I know him to be innocent.”

“I must go home now, for dad is very ill, and he misses me so if I leave him. Good-bye, and God help you in your undertaking.” She hurried from the room as impulsively as she had entered, and we heard the wheels of her carriage rattle off down the street.

“I am ashamed of you, Holmes,” said Lestrade with dignity after a few minutes’ silence. “Why should you raise up hopes which you are bound to disappoint? I am not over-tender of heart, but I call it cruel.”

“I think that I see my way to clearing James McCarthy,” said Holmes. “Have you an order to see him in prison?”

“Then I shall reconsider my resolution about going out. We have still time to take a train to Hereford and see him to-night?”

“Then let us do so. Watson, I fear that you will find it very slow, but I shall only be away a couple of hours.”

I walked down to the station with them, and then wandered through the streets of the little town, finally returning to the hotel, where I lay upon the sofa and tried to interest myself in a yellow-backed novel. The puny plot of the story was so thin, however, when compared to the deep mystery through which we were groping, and I found my attention wander so continually from the action to the fact, that I at last flung it across the room and gave myself up entirely to a consideration of the events of the day. Supposing that this unhappy young man’s story were absolutely true, then what hellish thing, what absolutely unforeseen and extraordinary calamity could have occurred between the time when he parted from his father, and the moment when, drawn back by his screams, he rushed into the glade? It was something terrible and deadly. What could it be? Might not the nature of the injuries reveal something to my medical instincts? I rang the bell and called for the weekly county paper, which contained a verbatim account of the inquest. In the surgeon’s deposition it was stated that the posterior third of the left parietal bone and the left half of the occipital bone had been shattered by a heavy blow from a blunt weapon. I marked the spot upon my own head. Clearly such a blow must have been struck from behind. That was to some extent in favour of the accused, as when seen quarrelling he was face to face with his father. Still, it did not go for very much, for the older man might have turned his back before the blow fell. Still, it might be worth while to call Holmes’ attention to it. Then there was the peculiar dying reference to a rat. What could that mean? It could not be delirium. A man dying from a sudden blow does not commonly become delirious. No, it was more likely to be an attempt to explain how he met his fate. But what could it indicate? I cudgelled my brains to find some possible explanation. And then the incident of the grey cloth seen by young McCarthy. If that were true the murderer must have dropped some part of his dress, presumably his overcoat, in his flight, and must have had the hardihood to return and to carry it away at the instant when the son was kneeling with his back turned not a dozen paces off. What a tissue of mysteries and improbabilities the whole thing was! I did not wonder at Lestrade’s opinion, and yet I had so much faith in Sherlock Holmes’ insight that I could not lose hope as long as every fresh fact seemed to strengthen his conviction of young McCarthy’s innocence.

It was late before Sherlock Holmes returned. He came back alone, for Lestrade was staying in lodgings in the town.

“The glass still keeps very high,” he remarked as he sat down. “It is of importance that it should not rain before we are able to go over the ground. On the other hand, a man should be at his very best and keenest for such nice work as that, and I did not wish to do it when fagged by a long journey. I have seen young McCarthy.”

“And what did you learn from him?”

“Could he throw no light?”

“None at all. I was inclined to think at one time that he knew who had done it and was screening him or her, but I am convinced now that he is as puzzled as everyone else. He is not a very quick-witted youth, though comely to look at and, I should think, sound at heart.”

“I cannot admire his taste,” I remarked, “if it is indeed a fact that he was averse to a marriage with so charming a young lady as this Miss Turner.”