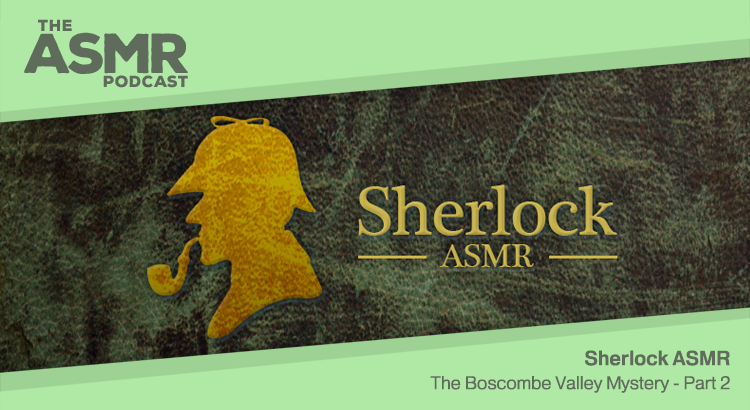 In Episode 70 of The ASMR Podcast we welcome back Sherlock ASMR, who continues his series of whispered Sherlock Holmes readings with the second part of ‘The Boscombe Valley Mystery’.

“I could hardly imagine a more damning case,” I remarked. “If ever circumstantial evidence pointed to a criminal it does so here.”

“Circumstantial evidence is a very tricky thing,” answered Holmes thoughtfully. “It may seem to point very straight to one thing, but if you shift your own point of view a little, you may find it pointing in an equally uncompromising manner to something entirely different. It must be confessed, however, that the case looks exceedingly grave against the young man, and it is very possible that he is indeed the culprit. There are several people in the neighbourhood, however, and among them Miss Turner, the daughter of the neighbouring landowner, who believe in his innocence, and who have retained Lestrade, whom you may recollect in connection with the Study in Scarlet, to work out the case in his interest. Lestrade, being rather puzzled, has referred the case to me, and hence it is that two middle-aged gentlemen are flying westward at fifty miles an hour instead of quietly digesting their breakfasts at home.”

“I am afraid,” said I, “that the facts are so obvious that you will find little credit to be gained out of this case.”

“There is nothing more deceptive than an obvious fact,” he answered, laughing. “Besides, we may chance to hit upon some other obvious facts which may have been by no means obvious to Mr. Lestrade. You know me too well to think that I am boasting when I say that I shall either confirm or destroy his theory by means which he is quite incapable of employing, or even of understanding. To take the first example to hand, I very clearly perceive that in your bedroom the window is upon the right-hand side, and yet I question whether Mr. Lestrade would have noted even so self-evident a thing as that.”

“My dear fellow, I know you well. I know the military neatness which characterises you. You shave every morning, and in this season you shave by the sunlight; but since your shaving is less and less complete as we get farther back on the left side, until it becomes positively slovenly as we get round the angle of the jaw, it is surely very clear that that side is less illuminated than the other. I could not imagine a man of your habits looking at himself in an equal light and being satisfied with such a result. I only quote this as a trivial example of observation and inference. Therein lies my métier, and it is just possible that it may be of some service in the investigation which lies before us. There are one or two minor points which were brought out in the inquest, and which are worth considering.”

“It appears that his arrest did not take place at once, but after the return to Hatherley Farm. On the inspector of constabulary informing him that he was a prisoner, he remarked that he was not surprised to hear it, and that it was no more than his deserts. This observation of his had the natural effect of removing any traces of doubt which might have remained in the minds of the coroner’s jury.”

“It was a confession,” I ejaculated.

“No, for it was followed by a protestation of innocence.”

“Coming on the top of such a damning series of events, it was at least a most suspicious remark.”

“On the contrary,” said Holmes, “it is the brightest rift which I can at present see in the clouds. However innocent he might be, he could not be such an absolute imbecile as not to see that the circumstances were very black against him. Had he appeared surprised at his own arrest, or feigned indignation at it, I should have looked upon it as highly suspicious, because such surprise or anger would not be natural under the circumstances, and yet might appear to be the best policy to a scheming man. His frank acceptance of the situation marks him as either an innocent man, or else as a man of considerable self-restraint and firmness. As to his remark about his deserts, it was also not unnatural if you consider that he stood beside the dead body of his father, and that there is no doubt that he had that very day so far forgotten his filial duty as to bandy words with him, and even, according to the little girl whose evidence is so important, to raise his hand as if to strike him. The self-reproach and contrition which are displayed in his remark appear to me to be the signs of a healthy mind rather than of a guilty one.”

I shook my head. “Many men have been hanged on far slighter evidence,” I remarked.

“So they have. And many men have been wrongfully hanged.”

“What is the young man’s own account of the matter?”

“It is, I am afraid, not very encouraging to his supporters, though there are one or two points in it which are suggestive. You will find it here, and may read it for yourself.”

He picked out from his bundle a copy of the local Herefordshire paper, and having turned down the sheet he pointed out the paragraph in which the unfortunate young man had given his own statement of what had occurred. I settled myself down in the corner of the carriage and read it very carefully. It ran in this way:

“Mr. James McCarthy, the only son of the deceased, was then called and gave evidence as follows: ‘I had been away from home for three days at Bristol, and had only just returned upon the morning of last Monday, the 3rd. My father was absent from home at the time of my arrival, and I was informed by the maid that he had driven over to Ross with John Cobb, the groom. Shortly after my return I heard the wheels of his trap in the yard, and, looking out of my window, I saw him get out and walk rapidly out of the yard, though I was not aware in which direction he was going. I then took my gun and strolled out in the direction of the Boscombe Pool, with the intention of visiting the rabbit warren which is upon the other side. On my way I saw William Crowder, the game-keeper, as he had stated in his evidence; but he is mistaken in thinking that I was following my father. I had no idea that he was in front of me. When about a hundred yards from the pool I heard a cry of “Cooee!” which was a usual signal between my father and myself. I then hurried forward, and found him standing by the pool. He appeared to be much surprised at seeing me and asked me rather roughly what I was doing there.”