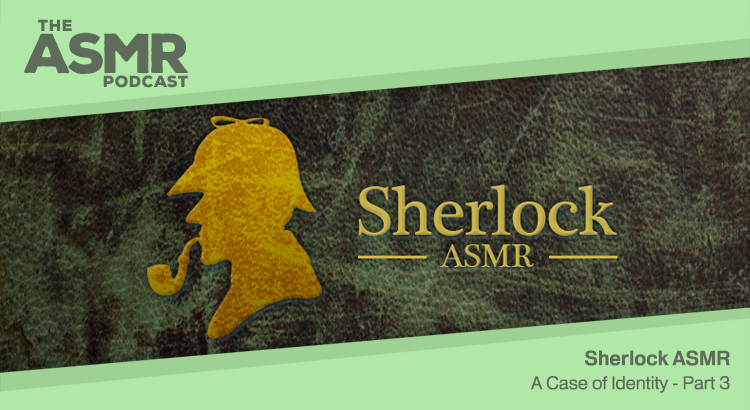 In Episode 67 of The ASMR Podcast we welcome back Sherlock ASMR, who continues his series of whispered Sherlock Holmes readings with the third part of ‘A Case of Identity’.

Sherlock Holmes sat silent for a few minutes with his fingertips still pressed together, his legs stretched out in front of him, and his gaze directed upward to the ceiling. Then he took down from the rack the old and oily clay pipe, which was to him as a counsellor, and, having lit it, he leaned back in his chair, with the thick blue cloud-wreaths spinning up from him, and a look of infinite languor in his face.

“Quite an interesting study, that maiden,” he observed. “I found her more interesting than her little problem, which, by the way, is rather a trite one. You will find parallel cases, if you consult my index, in Andover in ’77, and there was something of the sort at The Hague last year. Old as is the idea, however, there were one or two details which were new to me. But the maiden herself was most instructive.”

“You appeared to read a good deal upon her which was quite invisible to me,” I remarked.

“Not invisible but unnoticed, Watson. You did not know where to look, and so you missed all that was important. I can never bring you to realise the importance of sleeves, the suggestiveness of thumb-nails, or the great issues that may hang from a boot-lace. Now, what did you gather from that woman’s appearance? Describe it.”

“Well, she had a slate-coloured, broad-brimmed straw hat, with a feather of a brickish red. Her jacket was black, with black beads sewn upon it, and a fringe of little black jet ornaments. Her dress was brown, rather darker than coffee colour, with a little purple plush at the neck and sleeves. Her gloves were greyish and were worn through at the right forefinger. Her boots I didn’t observe. She had small round, hanging gold earrings, and a general air of being fairly well-to-do in a vulgar, comfortable, easy-going way.”

Sherlock Holmes clapped his hands softly together and chuckled.

“ ’Pon my word, Watson, you are coming along wonderfully. You have really done very well indeed. It is true that you have missed everything of importance, but you have hit upon the method, and you have a quick eye for colour. Never trust to general impressions, my boy, but concentrate yourself upon details. My first glance is always at a woman’s sleeve. In a man it is perhaps better first to take the knee of the trouser. As you observe, this woman had plush upon her sleeves, which is a most useful material for showing traces. The double line a little above the wrist, where the typewritist presses against the table, was beautifully defined. The sewing-machine, of the hand type, leaves a similar mark, but only on the left arm, and on the side of it farthest from the thumb, instead of being right across the broadest part, as this was. I then glanced at her face, and, observing the dint of a pince-nez at either side of her nose, I ventured a remark upon short sight and typewriting, which seemed to surprise her.”

“But, surely, it was obvious. I was then much surprised and interested on glancing down to observe that, though the boots which she was wearing were not unlike each other, they were really odd ones; the one having a slightly decorated toe-cap, and the other a plain one. One was buttoned only in the two lower buttons out of five, and the other at the first, third, and fifth. Now, when you see that a young lady, otherwise neatly dressed, has come away from home with odd boots, half-buttoned, it is no great deduction to say that she came away in a hurry.”

“And what else?” I asked, keenly interested, as I always was, by my friend’s incisive reasoning.

“I noted, in passing, that she had written a note before leaving home but after being fully dressed. You observed that her right glove was torn at the forefinger, but you did not apparently see that both glove and finger were stained with violet ink. She had written in a hurry and dipped her pen too deep. It must have been this morning, or the mark would not remain clear upon the finger. All this is amusing, though rather elementary, but I must go back to business, Watson. Would you mind reading me the advertised description of Mr. Hosmer Angel?”

I held the little printed slip to the light.

“Missing,” it said, “on the morning of the fourteenth, a gentleman named Hosmer Angel. About five ft. seven in. in height; strongly built, sallow complexion, black hair, a little bald in the centre, bushy, black side-whiskers and moustache; tinted glasses, slight infirmity of speech. Was dressed, when last seen, in black frock-coat faced with silk, black waistcoat, gold Albert chain, and grey Harris tweed trousers, with brown gaiters over elastic-sided boots. Known to have been employed in an office in Leadenhall Street. Anybody bringing—”

“That will do,” said Holmes. “As to the letters,” he continued, glancing over them, “they are very commonplace. Absolutely no clue in them to Mr. Angel, save that he quotes Balzac once. There is one remarkable point, however, which will no doubt strike you.”

“They are typewritten,” I remarked.

“Not only that, but the signature is typewritten. Look at the neat little ‘Hosmer Angel’ at the bottom. There is a date, you see, but no superscription except Leadenhall Street, which is rather vague. The point about the signature is very suggestive—in fact, we may call it conclusive.”

“My dear fellow, is it possible you do not see how strongly it bears upon the case?”

“I cannot say that I do unless it were that he wished to be able to deny his signature if an action for breach of promise were instituted.”

“No, that was not the point. However, I shall write two letters, which should settle the matter. One is to a firm in the City, the other is to the young lady’s stepfather, Mr. Windibank, asking him whether he could meet us here at six o’clock to-morrow evening. It is just as well that we should do business with the male relatives. And now, Doctor, we can do nothing until the answers to those letters come, so we may put our little problem upon the shelf for the interim.”

I had had so many reasons to believe in my friend’s subtle powers of reasoning and extraordinary energy in action that I felt that he must have some solid grounds for the assured and easy demeanour with which he treated the singular mystery which he had been called upon to fathom. Once only had I known him to fail, in the case of the King of Bohemia and of the Irene Adler photograph; but when I looked back to the weird business of the Sign of Four, and the extraordinary circumstances connected with the Study in Scarlet, I felt that it would be a strange tangle indeed which he could not unravel.

I left him then, still puffing at his black clay pipe, with the conviction that when I came again on the next evening I would find that he held in his hands all the clues which would lead up to the identity of the disappearing bridegroom of Miss Mary Sutherland.

A professional case of great gravity was engaging my own attention at the time, and the whole of next day I was busy at the bedside of the sufferer. It was not until close upon six o’clock that I found myself free and was able to spring into a hansom and drive to Baker Street, half afraid that I might be too late to assist at the dénouement of the little mystery. I found Sherlock Holmes alone, however, half asleep, with his long, thin form curled up in the recesses of his armchair. A formidable array of bottles and test-tubes, with the pungent cleanly smell of hydrochloric acid, told me that he had spent his day in the chemical work which was so dear to him.

“Well, have you solved it?” I asked as I entered.

“Yes. It was the bisulphate of baryta.”

“Oh, that! I thought of the salt that I have been working upon. There was never any mystery in the matter, though, as I said yesterday, some of the details are of interest. The only drawback is that there is no law, I fear, that can touch the scoundrel.”
“Who was he, then, and what was his object in deserting Miss Sutherland?”

The question was hardly out of my mouth, and Holmes had not yet opened his lips to reply, when we heard a heavy footfall in the passage and a tap at the door.

“This is the girl’s stepfather, Mr. James Windibank,” said Holmes. “He has written to me to say that he would be here at six. Come in!”

The man who entered was a sturdy, middle-sized fellow, some thirty years of age, clean-shaven, and sallow-skinned, with a bland, insinuating manner, and a pair of wonderfully sharp and penetrating grey eyes. He shot a questioning glance at each of us, placed his shiny top-hat upon the sideboard, and with a slight bow sidled down into the nearest chair.

“Good-evening, Mr. James Windibank,” said Holmes. “I think that this typewritten letter is from you, in which you made an appointment with me for six o’clock?”

“Yes, sir. I am afraid that I am a little late, but I am not quite my own master, you know. I am sorry that Miss Sutherland has troubled you about this little matter, for I think it is far better not to wash linen of the sort in public. It was quite against my wishes that she came, but she is a very excitable, impulsive girl, as you may have noticed, and she is not easily controlled when she has made up her mind on a point. Of course, I did not mind you so much, as you are not connected with the official police, but it is not pleasant to have a family misfortune like this noised abroad. Besides, it is a useless expense, for how could you possibly find this Hosmer Angel?”

“On the contrary,” said Holmes quietly; “I have every reason to believe that I will succeed in discovering Mr. Hosmer Angel.”