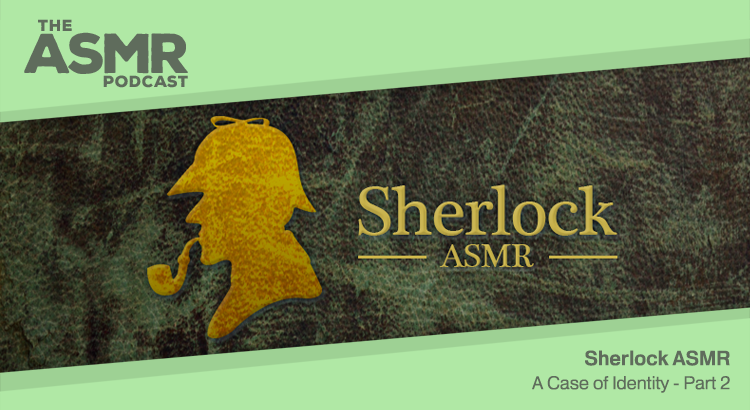 In Episode 64 of The ASMR Podcast we welcome back Sherlock ASMR, who continues his series of whispered Sherlock Holmes readings with the second part of ‘A Case of Identity’.

A flush stole over Miss Sutherland’s face, and she picked nervously at the fringe of her jacket. “I met him first at the gasfitters’ ball,” she said. “They used to send father tickets when he was alive, and then afterwards they remembered us, and sent them to mother. Mr. Windibank did not wish us to go. He never did wish us to go anywhere. He would get quite mad if I wanted so much as to join a Sunday-school treat. But this time I was set on going, and I would go; for what right had he to prevent? He said the folk were not fit for us to know, when all father’s friends were to be there. And he said that I had nothing fit to wear, when I had my purple plush that I had never so much as taken out of the drawer. At last, when nothing else would do, he went off to France upon the business of the firm, but we went, mother and I, with Mr. Hardy, who used to be our foreman, and it was there I met Mr. Hosmer Angel.”

“I suppose,” said Holmes, “that when Mr. Windibank came back from France he was very annoyed at your having gone to the ball.”

“Oh, well, he was very good about it. He laughed, I remember, and shrugged his shoulders, and said there was no use denying anything to a woman, for she would have her way.”

“I see. Then at the gasfitters’ ball you met, as I understand, a gentleman called Mr. Hosmer Angel.”

“Yes, sir. I met him that night, and he called next day to ask if we had got home all safe, and after that we met him—that is to say, Mr. Holmes, I met him twice for walks, but after that father came back again, and Mr. Hosmer Angel could not come to the house any more.”

“Well, you know father didn’t like anything of the sort. He wouldn’t have any visitors if he could help it, and he used to say that a woman should be happy in her own family circle. But then, as I used to say to mother, a woman wants her own circle to begin with, and I had not got mine yet.”

“But how about Mr. Hosmer Angel? Did he make no attempt to see you?”

“Well, father was going off to France again in a week, and Hosmer wrote and said that it would be safer and better not to see each other until he had gone. We could write in the meantime, and he used to write every day. I took the letters in in the morning, so there was no need for father to know.”

“Were you engaged to the gentleman at this time?”

“Oh, yes, Mr. Holmes. We were engaged after the first walk that we took. Hosmer—Mr. Angel—was a cashier in an office in Leadenhall Street—and—”

“He slept on the premises.”

“And you don’t know his address?”

“No—except that it was Leadenhall Street.”

“Where did you address your letters, then?”

“To the Leadenhall Street Post Office, to be left till called for. He said that if they were sent to the office he would be chaffed by all the other clerks about having letters from a lady, so I offered to typewrite them, like he did his, but he wouldn’t have that, for he said that when I wrote them they seemed to come from me, but when they were typewritten he always felt that the machine had come between us. That will just show you how fond he was of me, Mr. Holmes, and the little things that he would think of.”

“It was most suggestive,” said Holmes. “It has long been an axiom of mine that the little things are infinitely the most important. Can you remember any other little things about Mr. Hosmer Angel?”

“He was a very shy man, Mr. Holmes. He would rather walk with me in the evening than in the daylight, for he said that he hated to be conspicuous. Very retiring and gentlemanly he was. Even his voice was gentle. He’d had the quinsy and swollen glands when he was young, he told me, and it had left him with a weak throat, and a hesitating, whispering fashion of speech. He was always well dressed, very neat and plain, but his eyes were weak, just as mine are, and he wore tinted glasses against the glare.”

“Well, and what happened when Mr. Windibank, your stepfather, returned to France?”

“Mr. Hosmer Angel came to the house again and proposed that we should marry before father came back. He was in dreadful earnest and made me swear, with my hands on the Testament, that whatever happened I would always be true to him. Mother said he was quite right to make me swear, and that it was a sign of his passion. Mother was all in his favour from the first and was even fonder of him than I was. Then, when they talked of marrying within the week, I began to ask about father; but they both said never to mind about father, but just to tell him afterwards, and mother said she would make it all right with him. I didn’t quite like that, Mr. Holmes. It seemed funny that I should ask his leave, as he was only a few years older than me; but I didn’t want to do anything on the sly, so I wrote to father at Bordeaux, where the company has its French offices, but the letter came back to me on the very morning of the wedding.”

“Yes, sir; for he had started to England just before it arrived.”

“Ha! that was unfortunate. Your wedding was arranged, then, for the Friday. Was it to be in church?”

“Yes, sir, but very quietly. It was to be at St. Saviour’s, near King’s Cross, and we were to have breakfast afterwards at the St. Pancras Hotel. Hosmer came for us in a hansom, but as there were two of us he put us both into it and stepped himself into a four-wheeler, which happened to be the only other cab in the street. We got to the church first, and when the four-wheeler drove up we waited for him to step out, but he never did, and when the cabman got down from the box and looked there was no one there! The cabman said that he could not imagine what had become of him, for he had seen him get in with his own eyes. That was last Friday, Mr. Holmes, and I have never seen or heard anything since then to throw any light upon what became of him.”

“It seems to me that you have been very shamefully treated,” said Holmes.

“Oh, no, sir! He was too good and kind to leave me so. Why, all the morning he was saying to me that, whatever happened, I was to be true; and that even if something quite unforeseen occurred to separate us, I was always to remember that I was pledged to him, and that he would claim his pledge sooner or later. It seemed strange talk for a wedding-morning, but what has happened since gives a meaning to it.”

“Most certainly it does. Your own opinion is, then, that some unforeseen catastrophe has occurred to him?”

“Yes, sir. I believe that he foresaw some danger, or else he would not have talked so. And then I think that what he foresaw happened.”

“But you have no notion as to what it could have been?”

“One more question. How did your mother take the matter?”

“She was angry, and said that I was never to speak of the matter again.”

“And your father? Did you tell him?”

“Yes; and he seemed to think, with me, that something had happened, and that I should hear of Hosmer again. As he said, what interest could anyone have in bringing me to the doors of the church, and then leaving me? Now, if he had borrowed my money, or if he had married me and got my money settled on him, there might be some reason, but Hosmer was very independent about money and never would look at a shilling of mine. And yet, what could have happened? And why could he not write? Oh, it drives me half-mad to think of it, and I can’t sleep a wink at night.” She pulled a little handkerchief out of her muff and began to sob heavily into it.

“I shall glance into the case for you,” said Holmes, rising, “and I have no doubt that we shall reach some definite result. Let the weight of the matter rest upon me now, and do not let your mind dwell upon it further. Above all, try to let Mr. Hosmer Angel vanish from your memory, as he has done from your life.”

“Then you don’t think I’ll see him again?”

“Then what has happened to him?”

“You will leave that question in my hands. I should like an accurate description of him and any letters of his which you can spare.”

“I advertised for him in last Saturday’s Chronicle,” said she. “Here is the slip and here are four letters from him.”

“Thank you. And your address?”

“Mr. Angel’s address you never had, I understand. Where is your father’s place of business?”

“He travels for Westhouse & Marbank, the great claret importers of Fenchurch Street.”

“Thank you. You have made your statement very clearly. You will leave the papers here, and remember the advice which I have given you. Let the whole incident be a sealed book, and do not allow it to affect your life.”

“You are very kind, Mr. Holmes, but I cannot do that. I shall be true to Hosmer. He shall find me ready when he comes back.”

For all the preposterous hat and the vacuous face, there was something noble in the simple faith of our visitor which compelled our respect. She laid her little bundle of papers upon the table and went her way, with a promise to come again whenever she might be summoned.