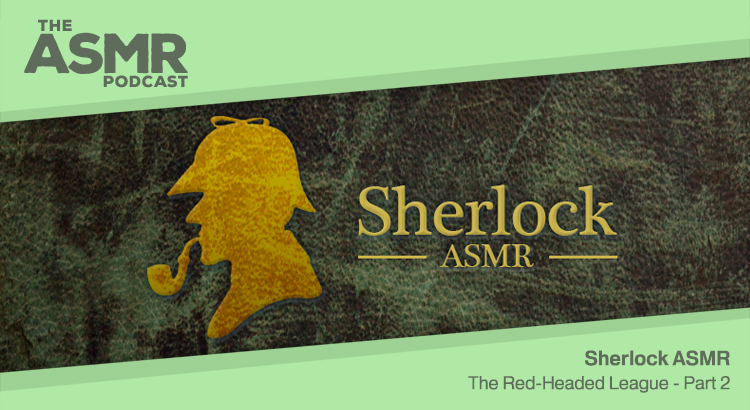 In Episode 59 of The ASMR Podcast we welcome back Sherlock ASMR, who continues his series of whispered Sherlock Holmes readings with the second part of ‘The Red-Headed League’.

“Well, I thought over the matter all day, and by evening I was in low spirits again; for I had quite persuaded myself that the whole affair must be some great hoax or fraud, though what its object might be I could not imagine. It seemed altogether past belief that anyone could make such a will, or that they would pay such a sum for doing anything so simple as copying out the Encyclopaedia Britannica. Vincent Spaulding did what he could to cheer me up, but by bedtime I had reasoned myself out of the whole thing. However, in the morning I determined to have a look at it anyhow, so I bought a penny bottle of ink, and with a quill-pen, and seven sheets of foolscap paper, I started off for Pope’s Court.

“Well, to my surprise and delight, everything was as right as possible. The table was set out ready for me, and Mr. Duncan Ross was there to see that I got fairly to work. He started me off upon the letter A, and then he left me; but he would drop in from time to time to see that all was right with me. At two o’clock he bade me good-day, complimented me upon the amount that I had written, and locked the door of the office after me.

“This went on day after day, Mr. Holmes, and on Saturday the manager came in and planked down four golden sovereigns for my week’s work. It was the same next week, and the same the week after. Every morning I was there at ten, and every afternoon I left at two. By degrees Mr. Duncan Ross took to coming in only once of a morning, and then, after a time, he did not come in at all. Still, of course, I never dared to leave the room for an instant, for I was not sure when he might come, and the billet was such a good one, and suited me so well, that I would not risk the loss of it.

“Eight weeks passed away like this, and I had written about Abbots and Archery and Armour and Architecture and Attica, and hoped with diligence that I might get on to the B’s before very long. It cost me something in foolscap, and I had pretty nearly filled a shelf with my writings. And then suddenly the whole business came to an end.”

“Yes, sir. And no later than this morning. I went to my work as usual at ten o’clock, but the door was shut and locked, with a little square of cardboard hammered on to the middle of the panel with a tack. Here it is, and you can read for yourself.”

He held up a piece of white cardboard about the size of a sheet of note-paper. It read in this fashion:

Sherlock Holmes and I surveyed this curt announcement and the rueful face behind it, until the comical side of the affair so completely overtopped every other consideration that we both burst out into a roar of laughter.

“I cannot see that there is anything very funny,” cried our client, flushing up to the roots of his flaming head. “If you can do nothing better than laugh at me, I can go elsewhere.”

“No, no,” cried Holmes, shoving him back into the chair from which he had half risen. “I really wouldn’t miss your case for the world. It is most refreshingly unusual. But there is, if you will excuse my saying so, something just a little funny about it. Pray what steps did you take when you found the card upon the door?”

“I was staggered, sir. I did not know what to do. Then I called at the offices round, but none of them seemed to know anything about it. Finally, I went to the landlord, who is an accountant living on the ground floor, and I asked him if he could tell me what had become of the Red-headed League. He said that he had never heard of any such body. Then I asked him who Mr. Duncan Ross was. He answered that the name was new to him.

“ ‘Oh,’ said he, ‘his name was William Morris. He was a solicitor and was using my room as a temporary convenience until his new premises were ready. He moved out yesterday.’

“I started off, Mr. Holmes, but when I got to that address it was a manufactory of artificial knee-caps, and no one in it had ever heard of either Mr. William Morris or Mr. Duncan Ross.”

“And what did you do then?” asked Holmes.

“I went home to Saxe-Coburg Square, and I took the advice of my assistant. But he could not help me in any way. He could only say that if I waited I should hear by post. But that was not quite good enough, Mr. Holmes. I did not wish to lose such a place without a struggle, so, as I had heard that you were good enough to give advice to poor folk who were in need of it, I came right away to you.”

“And you did very wisely,” said Holmes. “Your case is an exceedingly remarkable one, and I shall be happy to look into it. From what you have told me I think that it is possible that graver issues hang from it than might at first sight appear.”

“As far as you are personally concerned,” remarked Holmes, “I do not see that you have any grievance against this extraordinary league. On the contrary, you are, as I understand, richer by some £30, to say nothing of the minute knowledge which you have gained on every subject which comes under the letter A. You have lost nothing by them.”

“No, sir. But I want to find out about them, and who they are, and what their object was in playing this prank—if it was a prank—upon me. It was a pretty expensive joke for them, for it cost them two and thirty pounds.”

“We shall endeavour to clear up these points for you. And, first, one or two questions, Mr. Wilson. This assistant of yours who first called your attention to the advertisement—how long had he been with you?”

“About a month then.”

“In answer to an advertisement.”

“Was he the only applicant?”

“Because he was handy and would come cheap.”

“Small, stout-built, very quick in his ways, no hair on his face, though he’s not short of thirty. Has a white splash of acid upon his forehead.”

Holmes sat up in his chair in considerable excitement. “I thought as much,” said he. “Have you ever observed that his ears are pierced for earrings?”

“Yes, sir. He told me that a gipsy had done it for him when he was a lad.”

“Hum!” said Holmes, sinking back in deep thought. “He is still with you?”

“And has your business been attended to in your absence?”

“Nothing to complain of, sir. There’s never very much to do of a morning.”

“That will do, Mr. Wilson. I shall be happy to give you an opinion upon the subject in the course of a day or two. To-day is Saturday, and I hope that by Monday we may come to a conclusion.”